Born in New York, Caroline Vincent Gerry graduated from Sarah Lawrence College in 1977. She also studied at l'Ecole des Beaux Arts in Paris and under Theodor Stamos at the Art Students League in NY. Up until the last ten years her primary artistic medium was painting. During the 1980s she created a series of Box Constructions which she exhibited at the Tibor de Nagy Gallery in New York along side such artists as Philip Guston, Alice Neel, Fairfield Porter, Wayne Thiebaud and Milton Avery. She cites the artist Joseph Cornell as a major influence; they met while she was still a young student and spent time in his New York studio. Though she still paints her preferred medium and focus shifted to photography, which she has said 'is painting with the lens". After studying photography at The International Center for Photography in NY and at the University of Aix in Aix En Provence in France she has exhibited her work at the Sundaram Tagore Gallery and Leila Heller Gallery in New York City. Caroline Gerry served on the Board of The New York Society For The Prevention Of Cruelty to Children for 14 years in New York and is currently on the board of RESETDOC.ORG USA Dialogues on Civilizations.

My early years of training at Ecole des Beaux Arts in Paris focused on color infused abstract paintings that were inspired in part by landscape. My work was instinctual not conceptual-driven by an emotional and sensual connection to nature. This same fascination with color, texture and landscape has inspired my photographs of India and South East Asia, regions of the world where vivid color continues to play an important role in every day life and culture. In India, in particular I also found myself drawn to the way work is ritualized and fundamentally connected to the surrounding landscape in a timeless manner. During my travels through out the world I have sought to capture with my lens fleeting moments in the elusive everyday life of indigenous people. The work in this collection is a fusion of painting and photography, movement and stasis. The enlargement of the images is meant to envelop the viewer cinematically echoing my keen interest in the films of Kurosawa and Werner Herzog, the video art of Bill Viola as well as the classic work of Cartier Bresson. Hopefully the images in this collection will evoke the essence of its title Somatheeram, which describes the ritual offerings of peace made at the point where land meets the sea. 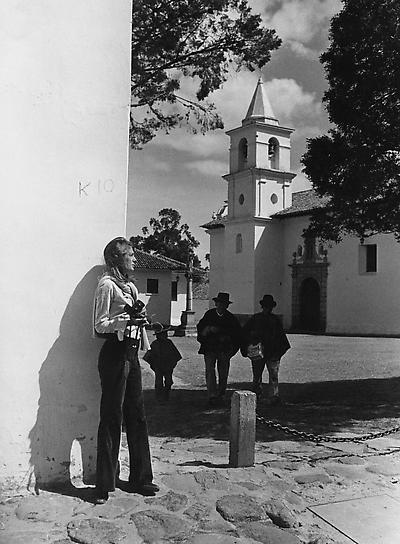